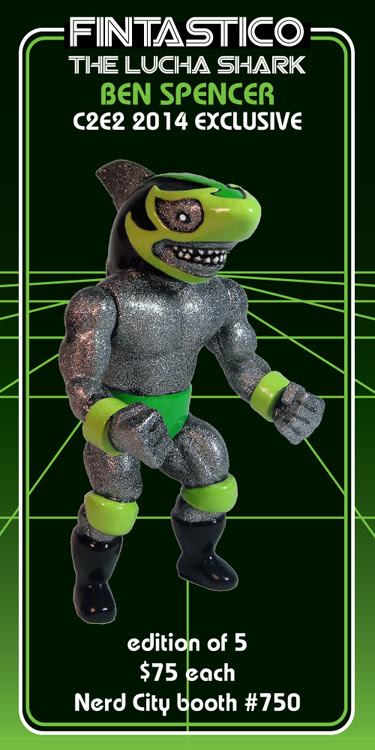 Once again, from that corner of the Galaxxorverse known as Hive World X-544 comes Fintastico, the mystical magician of The Lucha Sharks! He'll amaze you with his arcane prowess as well as his gleaming, glittery skin! This figure was sculpted and designed by Ben Spencer and fine tuned and produced in resin by Marty "The Godbeast" Hansen at True Cast Studio. Fintastico was also given a brilliant glittery finish and hand painted by Ben Spencer. This figure is limited to an edition of 5 and will never be produced in this colorway ever again. Fintastico features 2 points of articulation and is exclusively available for $75 each at Nerd City's booth (we don't know the #, yet!)  starting on 04.25.14 at C2E2.
It should also be noted that Fintastico will be the last Lucha Shark figure done in this specific sculpt. TGB and I have discussed doing different types of sharks and characters in the line from the very beginning, and this will be the last figure done with the Great White mold.
Fintastico is also part of a great lineup of C2E2 2014 Exclusives at the Nerd City booth. 2014 will see Nerd City hosting an insanely cool lineup of extremely limited exclusives, from resin art figures, to vinyl designer toys, to pvc production figures, to limited edition prints and books. If you are going to be at C2E2, DO NOT MISS NERD CITY'S BOOTH!
If there is any leftover stock following the con, Fintastico will be available in from The Galaxxor Online Store.
For even more pics and info, be sure to check out the official Lucha Sharks blog.
Posted by Ben at 6:49:00 AM No comments: