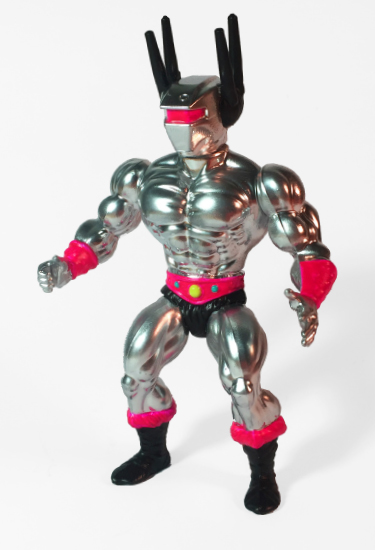 My friend John, over at Dollar Slice Bootlegs has been making some amazing stuff over the past couple ov years. He's a truly talented artist with a mind for the absurd and an eye for design. At one point, a while back, we came up with the idea of doing a collab. At the time, he had just dropped Mr. Ca$h Grab, a resin mashup figure sporting a Macross Valkyrie/Jetfire head. Of course, me being me, I was like, "Hey, let's put that thing on a vintage MOTU barbarian buck!"
Around the same time, I was discussing with my man Brandon over at ManOrMonster? Studios, his method for a very reflective silver (nearly chrome!) finish that he was getting. Ideas started rumbling around in my brain. ROM the Spaceknight snuck in there. And then, one night, I had a dream about a character named "Starjack". It all just sort of fell together. 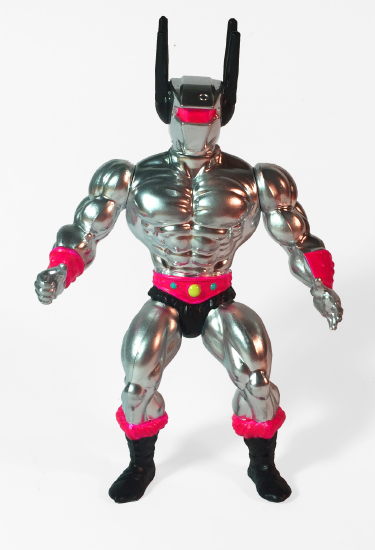 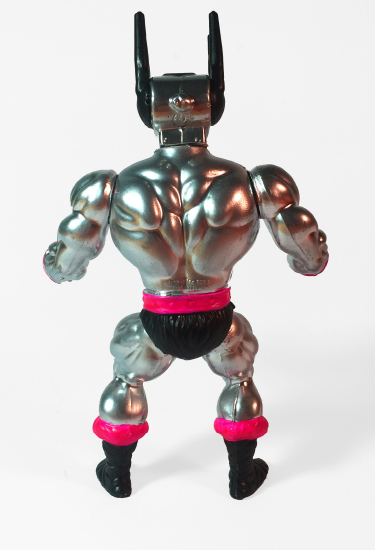 Once the greatest robot hero of a far off dimension from an alternative timeline, The Mighty Starjack fell from grace and descended into madness. He found himself stranded on a primitive planet, occupied almost entirely by giant reptilian beasts and man eating plants. Over the centuries, Starjack changed, evolved. He took on a far more barbaric form, and over time rose to dominance over the beasts of his strange new home.
In the dimension shattering swirl of the Cosmic Supernova, Starjack found himself plucked from his own timeline and thrown directly into the heart of the Galaxxorverse.
Mentally revived, and more physically powerful than ever, the Mighty Starjack stood beside Galaxxor 015 in the battle against Gorgax and his evil forces. 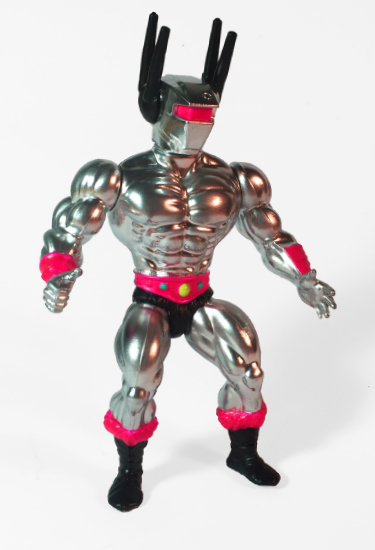 Starjack is a 5.5" custom art figure that features 2 points of articulation (arms). The head was cast in resin by Dollar Slice Bootlegs and the body is a restored vintage MOTU barbarian buck. Painting duties were handled by Ben Spencer.
Starjack comes in a bag and header packaging, is limited to an edition of 5, and will be $75, each. The figure will be exclusively available at Nerd City's booth #1003 at Designer Con, November 21st and 22nd.
That may just be it for the Designer Con announcements.
Or is it? 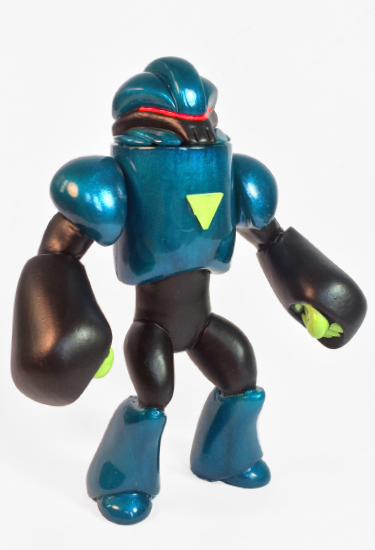 Believe it or not, the Galaxxor project just turned 5 years old. It has been a process of learning, developing, missteps, learning from missteps, honing skills, and figuring out what I actually wanted to do. Along the way, the help and support of  Marty "The Godbeast" Hansen and Matt Doughty has been absolutely crucial to Galaxxor's growth. And those guys have continued to support and guide me, as I work toward the next phase of The Galaxxorverse.
So, I felt it was only appropriate that the last (for the foreseeable future, at least) resin 5.5" Galaxxor figure should highlight their amazing contributions. The head sculpt of Galaxxor 015 is all Matt Doughty. We've seen it a couple of times before, years ago at NYCC and a couple of years ago with Infection Galaxxor. The figure is cast in an absolutely gorgeous swirly metallic teal by Mr. Godbeast, himself. 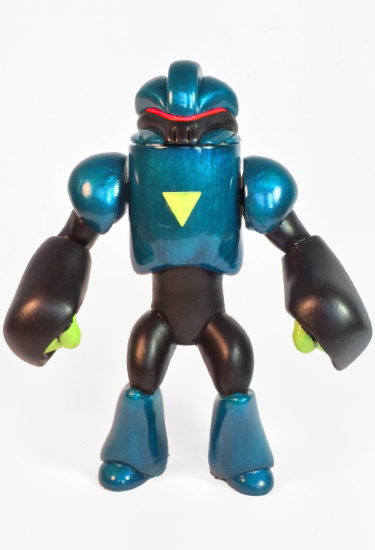 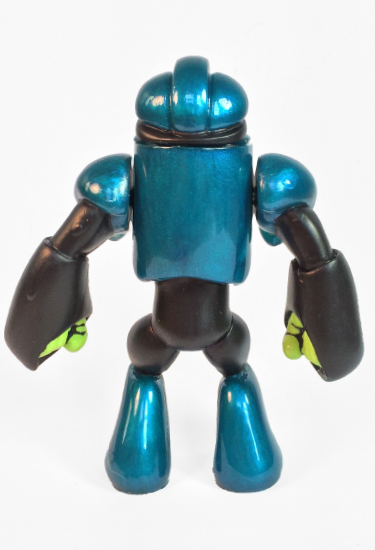 Chronodar's manipulation of the Alpha timelines resulted in a Cosmic Supernova. Swirling, crackling green energies formed into a cosmic vortex right outside of the Anubis-5 system. Realities began converging and colliding. Infinite variations of instances occurred simultaneously. The Alpha was imploding.
Imbued with the power of Ollen, the wise Space Dragon, Galaxxor 015 flew directly into the heart of The Cosmic Supernova.
Summoning all of the power of  The Alpha, he forced the rift shut, folding realities in upon one another. Sonic booms and built to a fever pitch. People and things ceased to exist. Other entities appeared out of nowhere.
And then there was silence.
Order had returned to The Galaxxorverse.
But everything had changed... 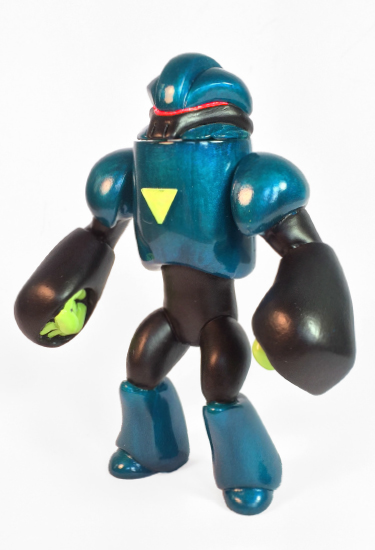 Galaxxor 015 is a 5.5" resin art figure that features 3 points of articulation (arms and head). The figure was hand cast in resin by The Godbeast. The original head sculpt is courtesy of Matt Doughty. The original body sculpt and painting duties were handled by Ben Spencer.
Galaxxor 015 comes in a bag and header packaging, is limited to an edition of 5, and will be $90, each. The figure will be exclusively available at Nerd City's booth #1003 at Designer Con, November 21st and 22nd.
Stay tuned for more exclusives, and some truly reality-shattering announcements coming up in the next couple of  weeks. See you at Designer Con!